Snacks are a given part of most people’s days, whether used as a tide-me-over between mealtimes, a top-up on needed nutrients, or as a replacement for meals. According to new data from the International Food and Information Council (IFIC)’s 2022 Health and Nutrition Survey1, nearly three in four Americans (73%) snack at least once a day. Elevated stress levels also lead to increased snacking habits. Nearly a third of individuals (29%) from the same survey who reported being “very stressed” were more likely to snack three or more times a day compared to those who reported being only somewhat stressed (10%).  Due to time pressure and higher levels of stress, patients need to balance easy and effortless snacking options that will help support their health goals and keep them satiated ahead of their next meal, which make almonds an ideal choice.

As dietitians, patients look to you for recommendations to improve their overall nutrition. More than three in five participants (66%) reported RDNs and personal health professionals as trusted sources to give them advice on what to eat. As such, you can help change your patients’ habits by reminding them that the same principles that help them balance their workload and stress can be applied to achieve healthy eating. Approaching snacking with a plan helps your clients get a handle on their day and offers the chance to choose healthy snacks with essential nutrients instead of quick, nutrient-poor options.  A few ways to simplify snacking include: 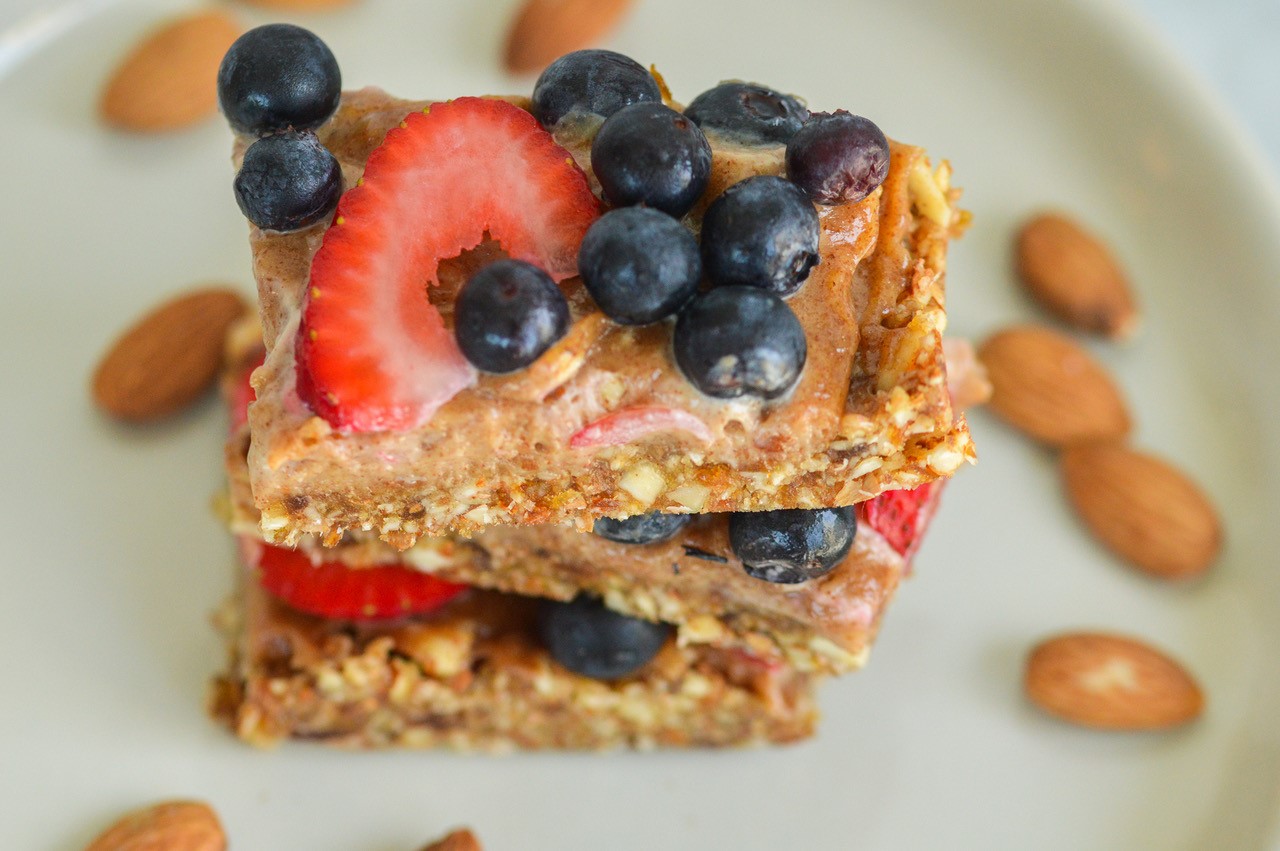 This no-bake snack bar works double duty as a breakfast bar or portable make-ahead snack with the delicate sweetness of berries and dates combined with the creaminess of almond butter to help keep your clients satisfied until their next meal.

A recent study2 investigates how almond snacking may be one way to help trim your daily calorie intake. In this study of 100 New Zealand adults aged 18 – 65 years, participants ate either at least 1.5 ounces of unroasted almonds or a calorie-matched sweet biscuit snack (the most popular New Zealand snack according to a survey). Both snacks accounted for 10% of total calorie intake, so in some cases, the amount of snack eaten was higher.

This study had a randomized crossover design, meaning that each participant completed the study eating the almond snack and then repeated the study eating the biscuit snack on a separate day, or vice versa, with a washout period between each treatment. On the test days, participants ate a standardized breakfast. Two hours later, they ate their assigned snack food. Blood glucose and appetite ratings were measured at baseline and at 15 or 30-minute intervals after they finished eating. Two hours after the snack, lunch was offered to participants, who ate as much or as little as desired and consumption was recorded. Participants then recorded their food intake for the remainder of the day.

​​​Study Limitations: The acute nature of the study provides useful information over the short term, but results will not necessarily translate into long-term behavior. Due to the different nutrient composition of the snack foods, energy density was not controlled. Monitoring blood glucose concentrations over longer periods may have been more informative since research has shown that whole almonds reduced glycemia acutely and the effects persisted after a second meal. Finally, the participants were of normal weight or overweight, so results cannot be extrapolated to other populations.

Conclusion: Eating almonds as a mid-morning snack, instead of a usual biscuit snack with equal calories, improved participants’ post-snack blood sugar responses and reduced energy intake over the remainder of the day. Replacing less healthy snacks with almonds may help support weight management efforts and help maintain healthy blood glucose levels. More research is needed to determine longer-term effects of this intervention and on broader populations.

Almonds + RDNs In The News

Starting the day off with the proper nutrients is essential to not only keeping you fueled throughout the day, but also to setting yourself up for long-term success and optimal health. In a recent article for Eat This, Not That, Registered Dietitian and recipe developer specializing in millennial nutrition Maggie Michalczyk suggests a better-for-your alternative to your flavored morning coffee. Instead of starting your day off with a high-calorie, low nutrient beverage which can lead to a sugar crash, she recommends making a coffee smoothie at home with “cold brew, banana, almond butter, and some delicious, pure honey." 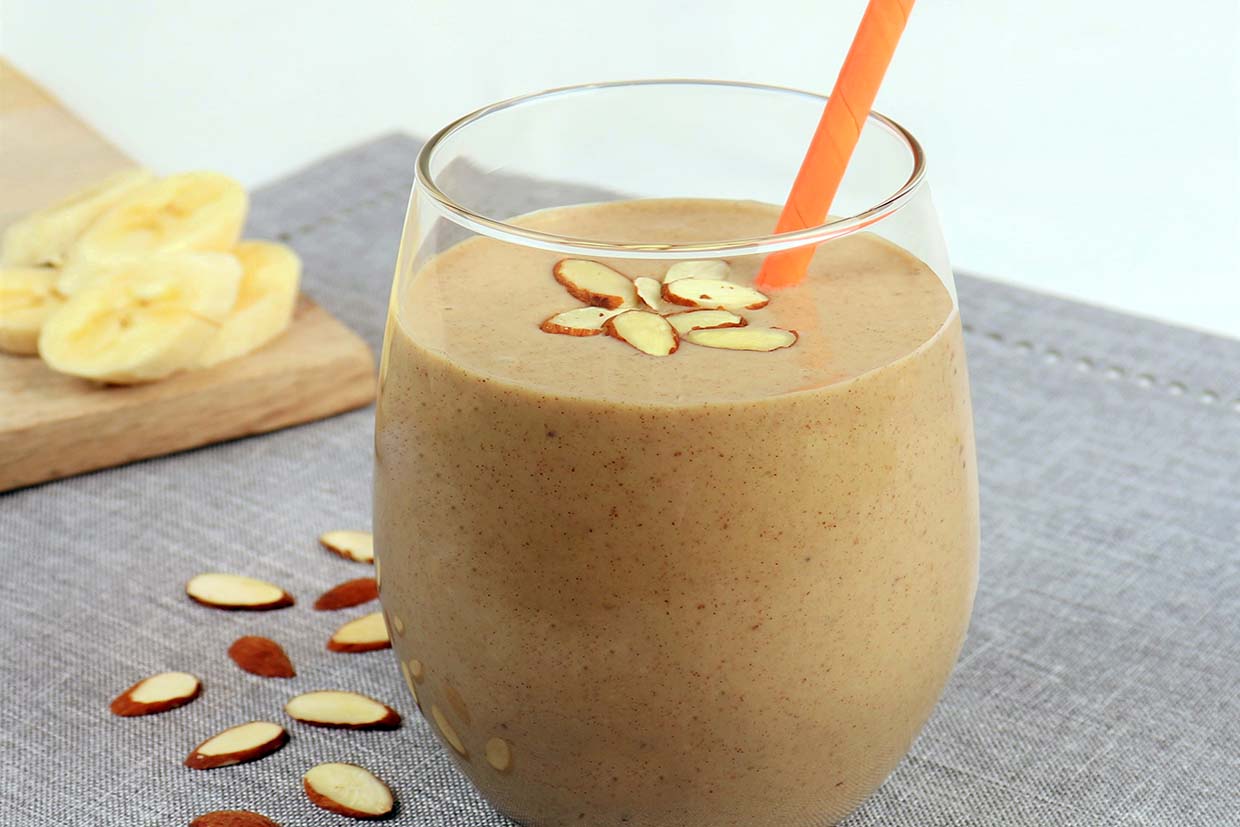 Maggie is passionate about food and nutrition and is all about attainable wellness! Follow her blog Once Upon A Pumpkin for delicious, nourishing recipes or you can follow her on Instagram.

FUEL YOUR DAY: SECRETS TO SUSTAINED ENERGY HANDOUT
This handout discusses the importance of sustained energy, which refers to fuel that provides a slow, measured release of energy that lasts hours, avoiding unwanted energy slumps.

MANAGING STRESS HANDOUT
This handout explores the harmful impact that stress can have on our minds and bodies and shares details about a novel study investigating how an almonds snack may improve the body’s resilience to mental stress.