California’s 2020 almond crop is getting one step closer to being enjoyed by all of you.

California’s 2020 almond crop is  getting one step closer to being enjoyed by all of you.  After all the shaking on the farm is over, almonds head to a huller/sheller facility where their protective outer coverings are removed.

The almonds pass through rollers and sifters to remove the fuzzy outer hull, inner shell and any debris from the orchard, such as sticks and rocks. The almond community practices a zero waste approach, using almond shells as livestock bedding and selling hulls to local dairies as cattle feed. The almond kernels that remain after this process are then shipped to facilities known as processors where they are sorted by size and quality.

While California has hundreds of huller/sheller facilities, providing some of the 110,000 jobs1 attributed to the almond community, one at the northern end of the Central Valley growing region stands out for its innovative approach. In addition to providing the general hulling and shelling services, North State Hulling has set out to build an integrated, carbon negative system at its new facility.

Originally founded by a handful of almond farmers near Chico, CA as a way to reduce operating costs, today North State Hulling is a co-op comprised on 130 different farming families. After deciding to relocate and build from scratch in 2018, their new state-of-the-art hulling/shelling facility embraces technology like each motor having its own IP address and geo-referenced stockpiles, increasing efficiency and saving time and money. They’ve also installed large dryers, important for achieving the right level of moisture in the case of rainstorms during harvest but also as capacity for a potential shift in almond farming practices to off-ground harvesting.

While those were just the pieces to get North State Hulling up and running, Phase II of their project really pushes the envelope. Slated to begin construction the end of this year’s harvest, they will be building two on-site power plants which will be fueled by almond shells and the sticks and twigs often brought in along with the crop. These power plants will provide electricity for the facility as well as putting some back into the state’s energy grid. Once these two pieces are on-line, the facility will be net carbon neutral. What’s more, a byproduct of the electricity generation process from the almond shells will be a form of bio-char. This material will then be available to member-owners to spread on their farms to help improve soil quality.

Working in partnership with California State University, Chico’s Center for Regenerative Agriculture and Resilient Systems (CRARS), North State Hulling has applied for a grant to study the regenerative ag benefits of using this bio-char in local orchards. According to Dr. Cindy Daley, director for CRARS, “their plan reduces energy consumption and emissions with state of the art dryers and a bioenergy plant that recycles almond coproducts into power and carbon that will be returned to the soil, where it improves water holding capacity and nutrient cycling.” 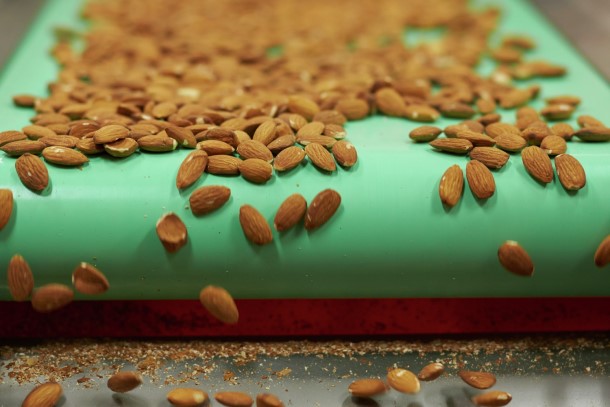 Through a variety of different approaches, the almond community is adopting climate smart practices that bring benefits to our farms and the planet. From regenerative approaches that benefit soil health and provide habitat to practices like how entire orchards full of trees are recycled at the end of their productive lives, California’s almond farmers are committed to responsibly growing a better future.  Follow along in our harvest series to learn how the final thing we grow on our farms – the tree – is used at the end of its lifetime.