A new survey from the International Food Information Council (IFIC) confirms that interest in plant-based eating is growing.

Vegetables, fruits, nuts, seeds, grains, beans and legumes have, of course, long been the basis of healthy eating recommendations in the US Dietary Guidelines and in other dietary recommendations around the world. While the plant-based concept is not new to RDNs, the lingo can be confusing to consumers. Some people mistakenly consider plant-based eating on par with vegetarian or vegan diets, but flexitarian eating or a Mediterranean diet probably come closest to describing a plant-based style. Unlike vegans, for example, who avoid animal foods based on a philosophy of animal rights, people who decide to go plant-based tend to do so for reasons more related to bettering health.

Read on for ways to help your shoppers learn about plant-based eating - from educating them about the difference between eating plant-based versus becoming a vegan or vegetarian to delicious ways to include more plant foods in their diets – our Almond Quinoa Power Bowl recipe is a perfect example. We’ve also included handouts that you’re welcome to use as teaching tools and you’ll also find a research update on a recent study that examined potential healthcare cost savings when almonds are included in the diet.

We just relaunched our website so take a few minutes to check it out. You’ll find lots of great new info there along with our oldies but goodies. Wishing you a happy start to summer! 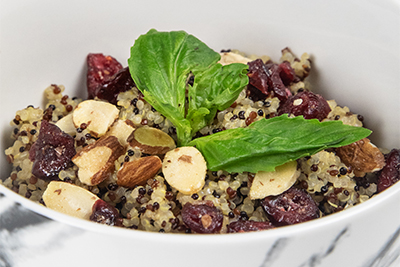 Sample Post:  This Almond Quinoa (keen-wah) Power Bowl is a cinch to make and has staying power, making it an easy grab- and-go lunch. Slivered almonds and quinoa offer protein and fiber; for a heartier meal, you can add grilled chicken.

Use these talking points at community and in-store events or in your media appearances as a starter for discussing plant-based eating:

Include this tip in your store blog, newsletter or circular:

Eating a plant-based diet doesn’t mean you need to become a vegetarian. It’s simply focusing the meals you eat on plant foods first: fruits, vegetables, beans, lentils, whole grains, seeds and nuts, like almonds. And it’s easier than you think! Whether lunch is a veggie-loaded salad with added beans, quinoa and a sprinkle of almonds, breakfast is quick-cooking steel cut oats in milk with blueberries and sliced almonds or dinner is fish tacos on corn tortillas with a slaw topping, a side of mango and cumin black beans, focusing the base of your meals on plant foods is a snap.

RESEARCH UPDATE: Examining the Link Between Almonds and Healthy Habits

People are always looking for the best tips for maintaining a healthy body weight and being in top health – without overhauling their entire lives.  Recent research by King’s College in London looked at the link between British almond eaters and their nutrient intakes, as well as some health measures.1

This UK research is actually the second analysis of population-based survey data showing that almond intake is associated with higher diet quality scores. The first study looked at US participants using data from the National Health and Examination Survey (NHANES) and found similar connections between almond intake – usual intake of about an ounce of almond in the course of a day – in diet quality scores and other health measures2. Specific highlights from this NHANES analysis included:

Researchers used data from the National Health and Nutrition Examination Survey (NHANES; 2001-2010) to look at the association between almond consumption and dietary adequacy and diet quality of American adults, along with other lifestyle components. Adults ages 19 years and older (n = 24,808) from across the United States were included. Almond consumers (n=395) were defined as those who reported consuming almonds or almond butter during at least one of their two 24-hour diet recalls.

This study suggests that almond consumers may have healthier overall lifestyle components than non-consumers, and that regular consumption of almonds should be encouraged as part of a healthy dietary pattern.  Currently, less than 2% of U.S. adults regularly eats almonds, which represents a large percentage of the population that might benefit from replacing empty-calorie snacks with almonds. The healthier habits associated with those who eat almonds may inspire wellness seekers to try this healthy grab-n-go snack.

Although eating almonds may not necessarily be the cause of these healthier lifestyle factors, there is something about the portfolio of healthier habits associated with people who choose almonds.  Study limitations also include the reliance on self-reported dietary intake collected during 24-hour dietary recalls, as well as the possibility that almond consumers were misclassified, and there is a potential for residual confounding.

Resources to the Rescue

Check out our Power of Plant-Based Meals  and Protein Power handouts – ideal for educating consumers about plant-based eating!