For four years running, the Mediterranean Diet has been crowned the Best Overall Diet by U.S. News and World Reports – and for good reason.  Its healthy dietary approach is easy to follow and enjoyable, with its emphasis on fresh fruit and vegetables, whole grains, nuts like almonds, seeds, beans and legumes, small portions of animal protein and fish, an optional glass (4 ounces) of red wine, and of course extra virgin olive oil. Numerous studies suggest health benefits associated with eating the Med way, including this recent research study published in the journal Nutrients that examined its potential against type 2 diabetes, heart disease and even some cancers.

While food is a key component of the Mediterranean diet, other tenets associated with it are sometimes overlooked. One of the core principles of the Med Diet that makes it sustainable and enjoyable is eating together.  Did you know that the Med Diet is awarded UNESCO status as an “Intangible Cultural Heritage”?  UNESCO cites this reasoning for such special distinction: “Eating together is the foundation of the cultural identity and continuity of communities throughout the Mediterranean basin. It is a moment of social exchange and communication, an affirmation and renewal of family, group or community identity. The Mediterranean diet emphasizes values of hospitality, neighborliness, intercultural dialogue and creativity, and a way of life guided by respect for diversity.”

Social support wherever you live is an important component of any healthy life-long approach to good nutrition.  As we all know, eating with others outside our immediate households has not been advised to limit the spread of COVID-19, but with warmer weather, more outdoor eating with others is possible.  And, the Med Diet works perfectly for bringing people together safely to dine al fresco.

Read on for ideas to promote foods to enjoy as part of the Med Diet approach to all of your shoppers during May and beyond. You’ll find a delicious grain-based salad, handouts on the Med Diet and skin health for you to download, talking points and copy to use in your store materials and appearances, and a summary of a recent study that investigated the effect of almonds on wrinkles and skin pigmentation!

Your shoppers will love this Med-inspired salad. For more delicious recipes, visit our Recipe Center. 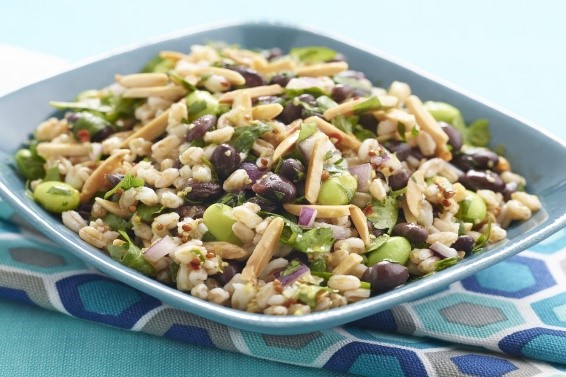 Sample Post:  This Med Diet brings together the nutritional goodness of whole grain farro, beans and crunchy #almonds. The hint of zesty cilantro is perfect for a spring lunch or summer side dish. You can also substitute barley or brown rice in place of farro.

Use these talking points for virtual store events or in your media appearances as a starter for talking about Med diet healthy swaps.

The Med Diet is a healthy dietary approach that is easy to follow and enjoyable. The diet pattern features lots of delicious food. Here are some specifics of the diet:

Need more help? A Registered Dietitian Nutritionist can help you create your own nutritious, pleasurable Med Diet eating plan. <add info on how to schedule telehealth visits with store dietitians if available in your stores>

Include this tip in your store blog, newsletter or circular:

New research suggests that there may be more than one reason to add almonds to your daily skin care routine. A new study by researchers at the University of California, Davis1 found that eating almonds daily in place of typical calorie-matched snacks improved measures of both wrinkle severity and skin pigmentation in postmenopausal women. The study was funded by the Almond Board of California and confirms and expands upon findings in a 2019 study.2

In this 6-month randomized controlled trial, 49 healthy postmenopausal women with Fitzpatrick skin type 1 or 2 (characterized by increased tendency to burn with sun exposure) completed the study. Participants were randomly assigned to one of two groups: in the intervention group, women ate almonds as a snack, which accounted for 20% of their total daily calorie intake, or 340 calories per day on average (about 2 one-ounce servings).  The control group ate a calorie-matched snack that also accounted for 20% of calories: a fig bar, granola bar or pretzels. Aside from these snacks, study participants ate their regular diets and did not eat any nuts or nut-containing products.

Skin assessments were made at the start of the study, and again at 8 weeks, 16 weeks and 24 weeks. At each of these visits, facial wrinkles and facial pigment intensity were assessed using high-resolution facial imaging and validated 3-D facial modeling and measurement. Skin hydration,  transepidermal water loss (TEWL) and sebum excretion were also assessed.

There was also a statistically significant decrease in overall facial pigment intensity (unevenness of skin tone) in the almond group: a 20% reduction by week 16 that remained so at week 24. Further, body weight remained constant for both the almond group and the control group from baseline to 24 weeks.

“Daily consumption of almonds may be an effective means of improving the appearance of facial wrinkles and skin tone (indicated by decreased pigment intensity) among postmenopausal women with Fitzpatrick skin types I and II. Consumers may describe this reduced pigmentation effect as having a more even skin tone,” according to Dr. Raja Sivamani, dermatologist and lead researcher of this study.

Transepidermal water loss, skin hydration and sebum excretion were measured on the forehead and cheeks in both groups during the study:

“Our findings emphasize the need to look at almonds as a whole food with multiple nutrient components including alpha-tocopherol (vitamin E) and good unsaturated fats, rather than oversimplifying potential benefits due to one nutrient alone. Almonds are high in alpha-tocopherol which has antioxidant functions, and may be partially responsible for the effects that we see in both wrinkles and skin tone in postmenopausal women,” says Dr. Sivamani.

Limitations of the study include its duration of 24 weeks; results do not provide insight into the potential effects of longer-term almond intake. Additionally, the study participants were postmenopausal women with Fitzpatrick skin types I and II (characterized by increased tendency to burn with sun exposure). More research is warranted to investigate the impact of almond consumption in other populations. And, although the snacks in both groups were calorie-matched, they were not macronutrient-matched.

Resources to the Rescue

We have what you need to help your shoppers learn more about making healthy food choices. Check out our Eat Your Way to Good Health with the Mediterranean Diet and Natural Beauty handouts.

EAT YOUR WAY TO GOOD HEALTH WITH THE MEDITERRANEAN DIET