From Heart Health Month to Valentine’s Day, it’s all about hearts in February. And by association, that includes Almond Day, celebrated each year on February 16. Did you know that the Almond Board just commemorated 25 years of nutrition research? It all began with this study on heart health.

Statistics from the American Heart Association (AHA) show that heart disease remains the #1 cause of death in the US. Physical activity is part of Life’s Simple 7, AHA’s recommended approaches for staying heart healthy. Along with being active, keeping a healthy weight, learning about cholesterol, not smoking or using smokeless tobacco, eating a heart-healthy diet, keeping blood pressure healthy, and learning about blood sugar and diabetes mellitus are part of Life’s Simple 7. 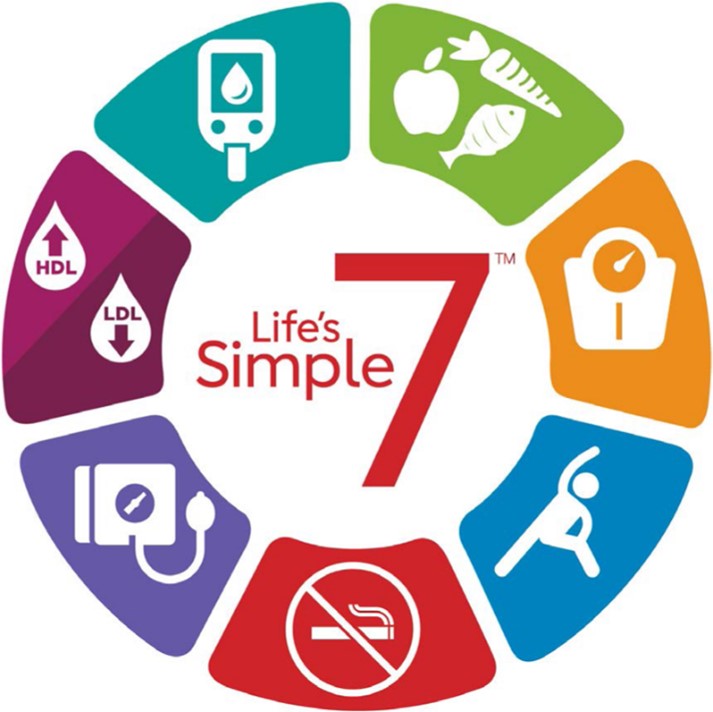 As a fitness pro, you play a huge role in helping people achieve – and maintain – good cardiovascular health. And you have your job cut out for you, based on recent data from AHA’s Heart Disease and Stroke Statistics—2020 Update, which shows a downward trend in physical activity. The prevalence of self-reported physical inactivity has declined sharply among adults, from 40.2% to 25.9% between 2005 and 2017, the most recent data available. The impact of COVID has not helped the situation, according a survey conducted by YouGov/The Economist in April 2020. According to the online survey results of 1486 Americans aged 18 years and older, 27% of survey respondents said that they had been exercising less often than usual as a result of the COVID crisis. The survey also found that 53% of respondents said they were exercising about the same as before and 17% said they were exercising more often than usual.

There is some good news in the AHA Update though, when it comes to eating: a substantial proportion of cardiovascular disease is attributable to dietary risks and there was improvement in the mean AHA healthy diet score. Specifically, the proportion with a poor diet decreased from 64.7% to 58.3% African Americans, from 66.0% to 57.5% for Mexican Americans, and from 54.0% to 45.9% for non-Hispanic whites.
These positive diet score changes were largely attributed to increased consumption of whole grains, nuts (such as almonds), seeds and legumes, as well as decreased consumption of sugar-sweetened beverages, according to the update.

Read on for ways to help celebrate heart health this month and educate your clients about smart snacks like almonds. You’ll find a savory snack mix recipe that’s worth celebrating, heart health and snack handouts to download, and a summary of a recent study that investigated the effect of almonds on markers of vascular health. Happy Heart Health Month!

RECIPE: Party in A Bag 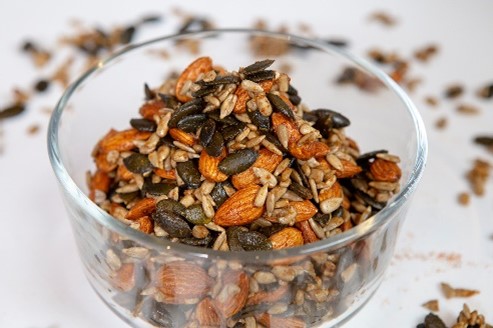 PARTY IN A BAG

Sample Post:  Did someone say PARTY?! Even if it’s just you and the fam celebrating, you’ll love this crunchy #almond snack mix. With 3 grams of fiber and 8 grams of plant protein per serving, what’s not to love? 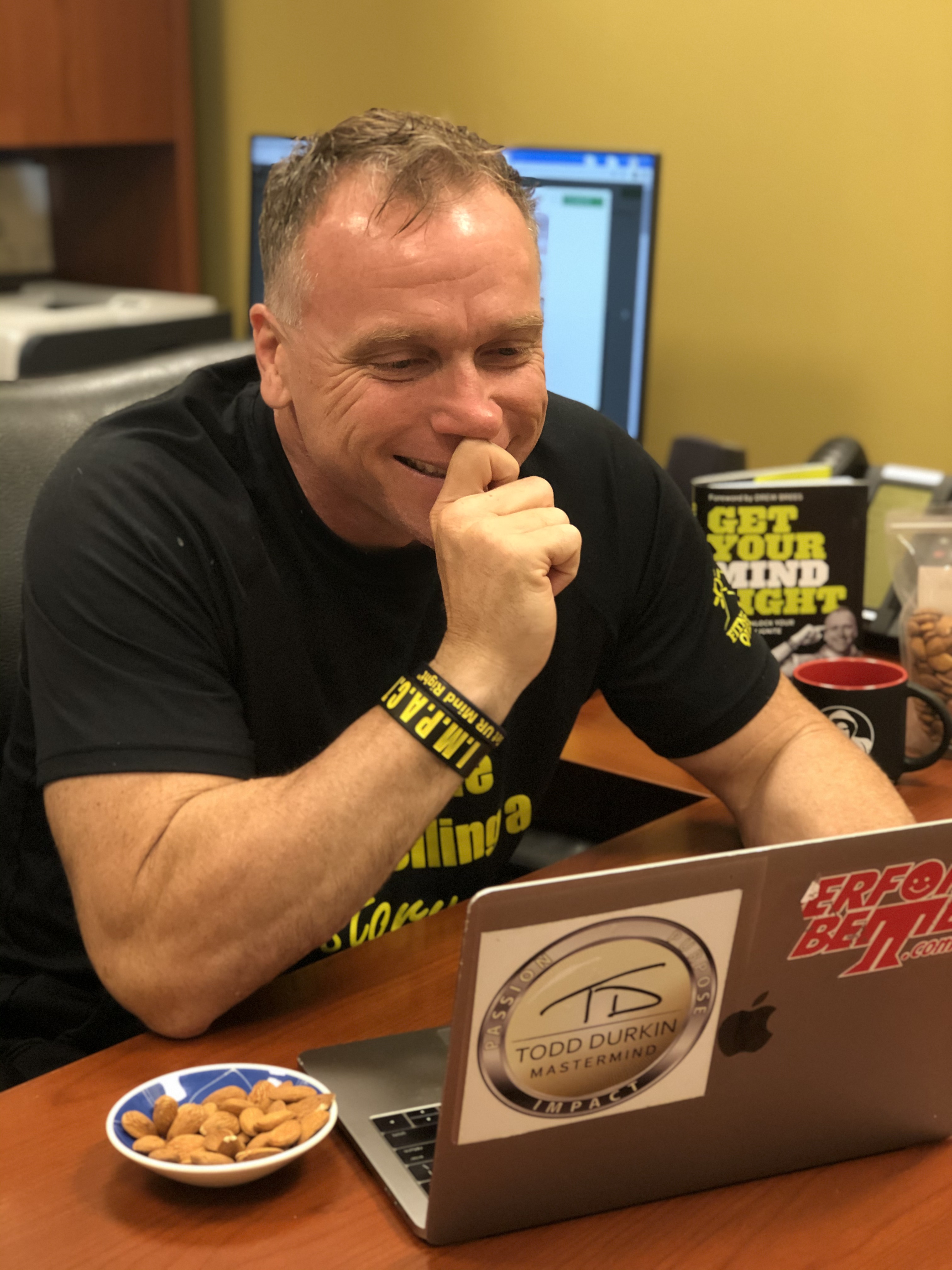 Did you catch our 4-part Fueling Fitness Webinar Series, moderated by the one and only Todd Durkin? This snack-sized masterclass explores the current state of the fitness industry and ways to make your business shine, despite obstacles. Each episode includes interviews with different fitness industry leaders, along with extensive handouts. And… each webinar is approved for 0.5 credit by ACE! Check out the summary of each episode topic listed below and visit here to watch the webinars.

For decades, researchers have investigated how eating almonds promotes heart health and now, there’s a novel discovery related to almond benefits.  In a recently published study1 in UK adults, snacking on almonds helped improve flow-mediated dilation (FMD), which is a key indicator of vascular health.  In addition, consuming almonds instead of a usual snack also lowered LDL-cholesterol in this group, which is consistent with previous research findings on almonds.  The study was funded by the Almond Board of California.

In this a 6-week trial at Kings College in London,  107 British adults between the ages of 30 and 70 years, all with above average cardiovascular disease risk, consumed almonds or a calorie-matched control snack providing 20% of each participants’ estimated daily energy needs.  The research team then compared cardiometabolic health markers between the two groups.

They found that the almond group, compared to the control group, experienced a 4% unit increase in endothelium-dependent vasodilation. Endothelial function – assessed by measuring flow-mediated dilation (FMD) – is a key factor in the development and progression of atherosclerosis. Improved FMD means that arteries can dilate more easily in response to increased blood flow, which is a strong indicator of cardiovascular health.

Additionally, LDL-cholesterol levels decreased in the almond group relative to the control group.  There was no difference between the two groups in liver fat and several other measures (triglycerides, HDL-cholesterol, glucose, insulin and others).

“This study showed that in this group of UK adults with increased CVD risk, eating almonds in place of the typical snacks that many of us consume in the UK was beneficial to  heart health. Those in the almond group saw reduced LDL-cholesterol levels and improved flow-mediated dilation, a measure of arterial health. Based on existing data on risk of cardiovascular disease, we predict that replacing typical snacks with almonds in the long term has the potential to reduce the adjusted relative risk of a cardiovascular event by 30%,” said Dr. Wendy Hall, PhD, co-principal investigator and Reader in Nutritional Sciences at King’s College London. Adjusted relative risk is the probability of an event happening to a person compared to another person who does not take a step in disease prevention, such as making a diet change.

Limitations of the study were the fact that there were some differences between groups in cardiometabolic disease risk factors at baseline.  The imbalance in recruitment by sex could mean that the results may not be as applicable to men since they made up only 30% of the randomized study population. Also, the participants were free-living, and although almond compliance was confirmed, it is possible there is potential for some inaccuracies in their reported food intake.  Click here to view the full study.

Take these tips to heart