Heart disease remains the number one cause of death in the United States and worldwide, and unfortunately, continues to rise year over year. It is estimated that at least 80% of heart attacks and strokes are preventable, and the majority of cardiovascular disease (CVD) risk factors can be prevented or controlled with a healthy diet and other lifestyle modifications.1

Diet is important to the management of CVD risk, and more than two decades of research by the Almond Board of California (ABC) supports the role of almonds in helping to maintain a healthy heart and healthy cholesterol levels. In fact, according to the U.S. Food and Drug Administration, scientific evidence suggests, but does not prove, that eating 1.5 ounces of nuts as part of a diet low in saturated fat and cholesterol may reduce the risk of heart disease.

Nutrition research has long been a cornerstone of the Almond Board of California and we continue to be committed to learning how almonds can help address public health concerns and promote healthy lifestyles.

In 1995, the Almond Board of California’s nutrition research efforts began with a focus on heart health. Today, we continue to fund additional innovative research to further our understanding and more importantly, provide people the sound evidence as they make dietary choices to support heart health and overall wellness.

Good news about fat. U.S. Dietary Guidelines recommend that the majority of your fat intake be unsaturated—and good news because one serving of almonds (28g) has 13g of unsaturated fat (healthy fat) and only 1g of saturated fat.

Moreover, a 2016 systematic review and meta-analysis examined the breadth of research on almonds and heart health. The analysis of 18 published randomized controlled trials with a total of 837 participants showed significant favorable effects of eating almonds on total cholesterol, harmful LDL-cholesterol and triglycerides, with no change in beneficial HDL-cholesterol levels2. The effects of almonds on total cholesterol were dose-dependent, which means a larger almond intake (45 g/day (~1.5 oz/day) resulted in a greater reduction in total cholesterol. The evidence indicates that consuming almonds should be encouraged as part of a healthy diet to help maintain healthy blood lipid levels and thus help reduce the risk of heart disease. To learn more about the analysis, click here. 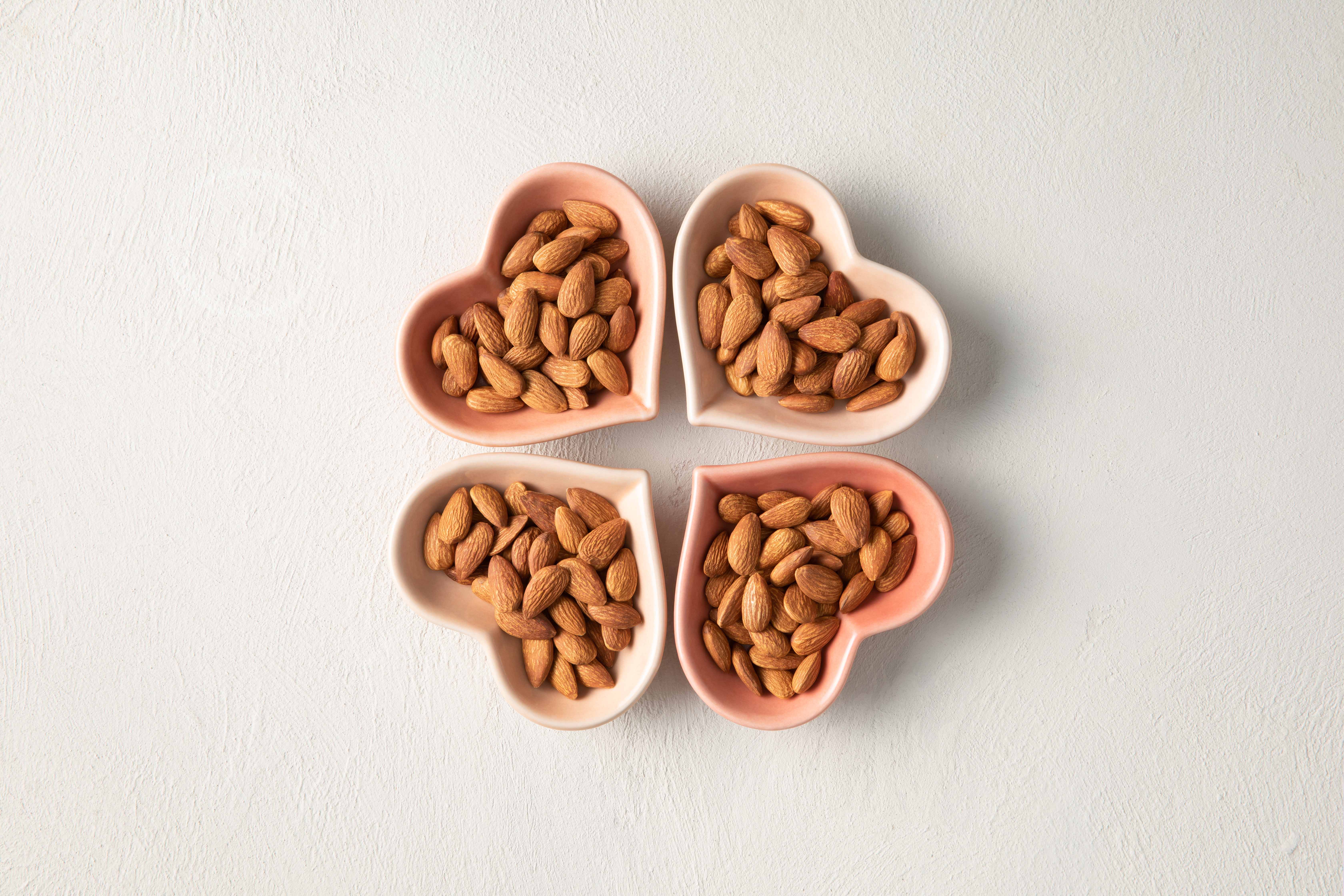 Research supporting the role of almonds in heart health initially began in 1992, and the Almond Board of California’s nutrition research program continued investigating the cardiovascular effects of almonds. Years of research in this area would eventually showcase that despite their fat content, almonds could play a role in supporting a healthy heart. Today, the Almond Board of California continues expanding into innovative heart health research areas, most recently looking at vascular health and the cardiac system’s resilience to mental stress.

A recent study3 from researchers at King’s College London called ATTIS (Almonds Trial Targeting Dietary Intervention with Snacks) looked at a British population and investigated several heart health risk factors as part of a multifactorial investigation. This six-week randomized control, parallel-arm trial had 107 participants (adults between 30-70 years old with above average cardiovascular disease risk) who consumed either almonds or a calorie-matched control snack providing 20% of each participant’s estimated daily energy needs. Compared to the control group, those in the almond group saw improved endothelial function, assessed by measuring flow-mediated dilation (FMD), a key indicator in the development and progression of atherosclerosis. Almond consumption significantly increased FMD by 4.1% units relative to the change control snacks. As this study was over the short term, further research should assess long-term effects.

This was a novel finding for almond nutrition research because improved FMD means that arteries can dilate more easily in response to increased blood flow, which is a strong indicator of cardiovascular health, and poor endothelial function is seen as a strong predictor of the initiation and progression of atherosclerosis. Further, LDL-cholesterol levels decreased in the almond group relative to the control group (mean difference was -0.25mmol). There was also no difference between the two groups in liver fat and several other measures (triglycerides, HDL cholesterol, glucose, insulin). Those in the almond group, compared to those in the control group, increased endothelium dependent vasodilation (mean difference 4.1% units of measurement). Plasma LDL-cholesterol concentrations decreased in the almond group relative to control (mean difference -0.25 mmol/L). Please visit Almond Living Magazine to learn more about these study findings.

We all encounter stress in our day-to-day and unfortunately, mental stress is among the psychosocial factors thought to contribute to cardiovascular disease (CVD) risk. Heart rate variability (HRV), a measure of the fluctuation in time intervals between consecutive heartbeats, is an important indicator of the cardiovascular system’s response to stress and it is thought that lifestyle factors including physical activity and diet might impact HRV. Higher HRV represents greater adaptability of the heart in response to environmental and psychological challenges, while low HRV is linked to cardiovascular disease and sudden cardiac death.

To better understand the correlation between almonds and HRV, researchers measured HRV in 105 participants undergoing a laboratory mental stress challenge and saw improvement in some measures of HRV in participants who had been replacing typical snacks with almonds over a six-week period.  In this secondary study of ATTIS2, researchers measured participants’ real-time heart rate HRV at rest (lying down for five-minute periods) and during an acute stress. During the acute mental stress, participants in the almond group showed better heart rate regulation compared to the control group, indicated by statistically significant differences in high frequency power, which specifically evaluates beat-to-beat intervals (a measure of HRV). The study findings demonstrate that eating almonds in place of typical snacks may diminish the drop in HRV that occurs during mental stress, thereby improving cardiac function. These results suggest that consuming tree nuts like almonds has the potential to increase cardiovascular resilience to mental stress by improving regulation of heart rate. Click here to learn more about the study findings. 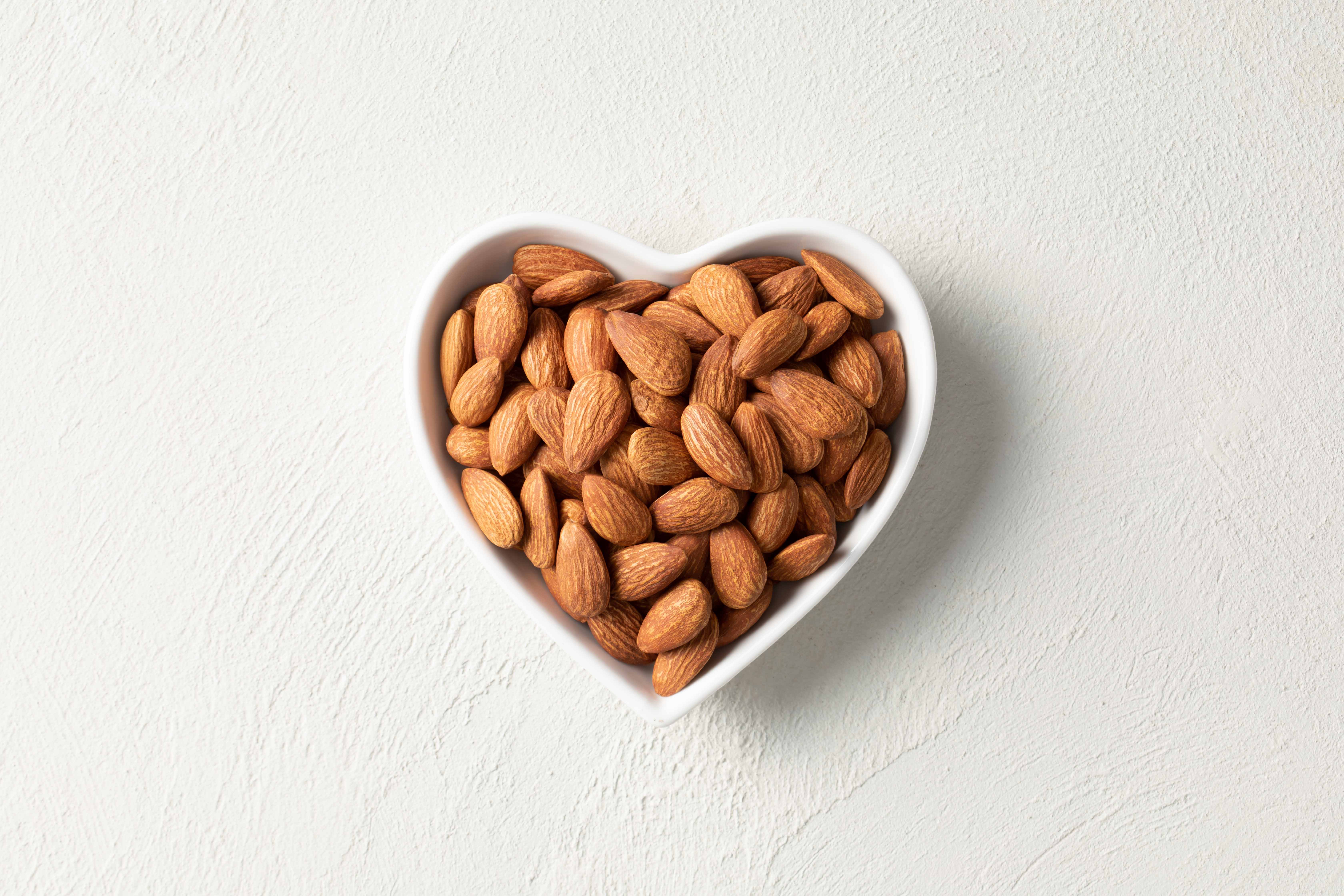 Timeline - A Look at Our Heart Healthy History

Great progress has been made over the past couple of decades, but it doesn’t stop there - the Almond Board of California currently has more research underway to help better understand the role almonds play in this critical health area. Want to dig deeper? Check out the state of almond research here.

Almonds are not only low on the glycemic index, but their powerful nutrient package makes every one-ounce serving (a handful), an easy way to snack smarter, especially when it comes to heart health:

Dietary changes are often the first and one of the most effective steps to reduce the risk of cardiovascular disease, and the body of research suggests that snacking on almonds can help maintain a healthy heart and healthy cholesterol levels. Incorporating almonds into your diet can be simple with these easy recipes: 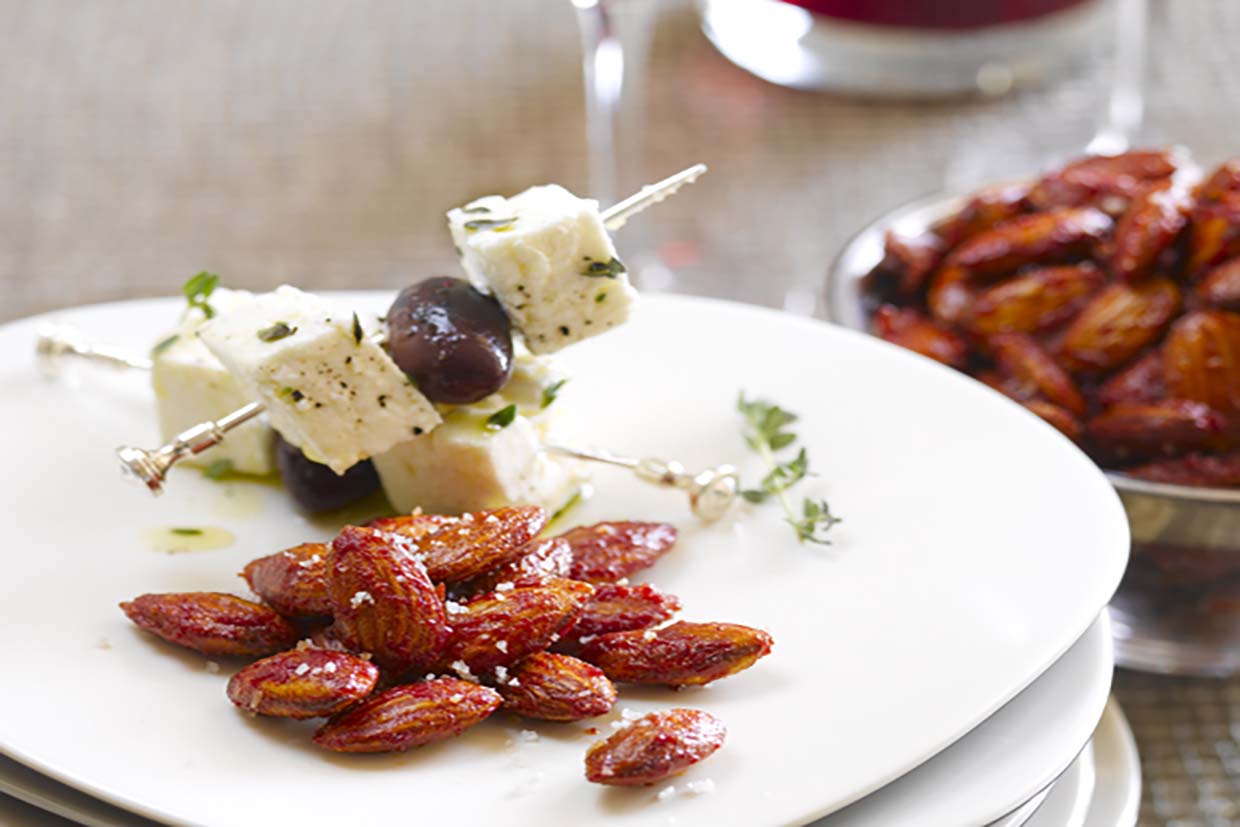 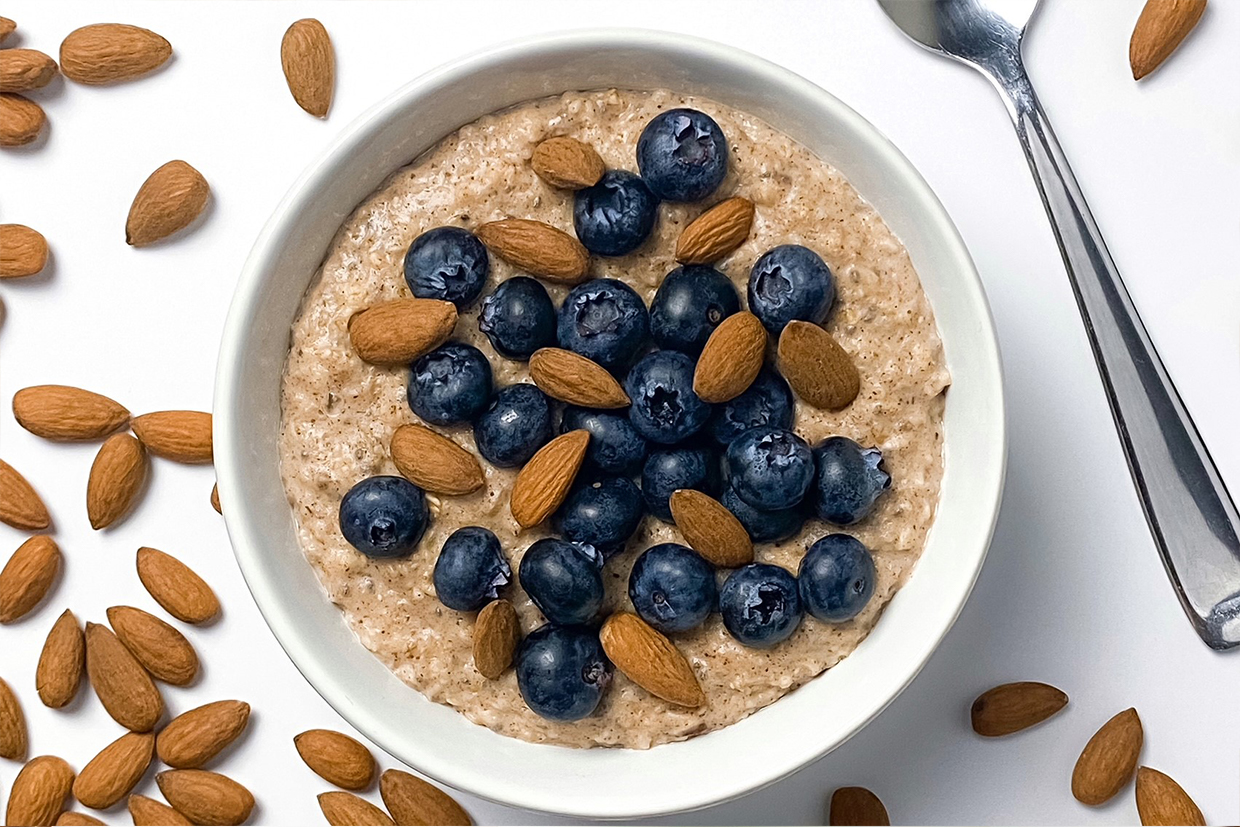 Guaranteed to be your new favorite comfort food! Power up and conquer the day ahead with a steaming bowl of oats to keep you full and fueled for hours. 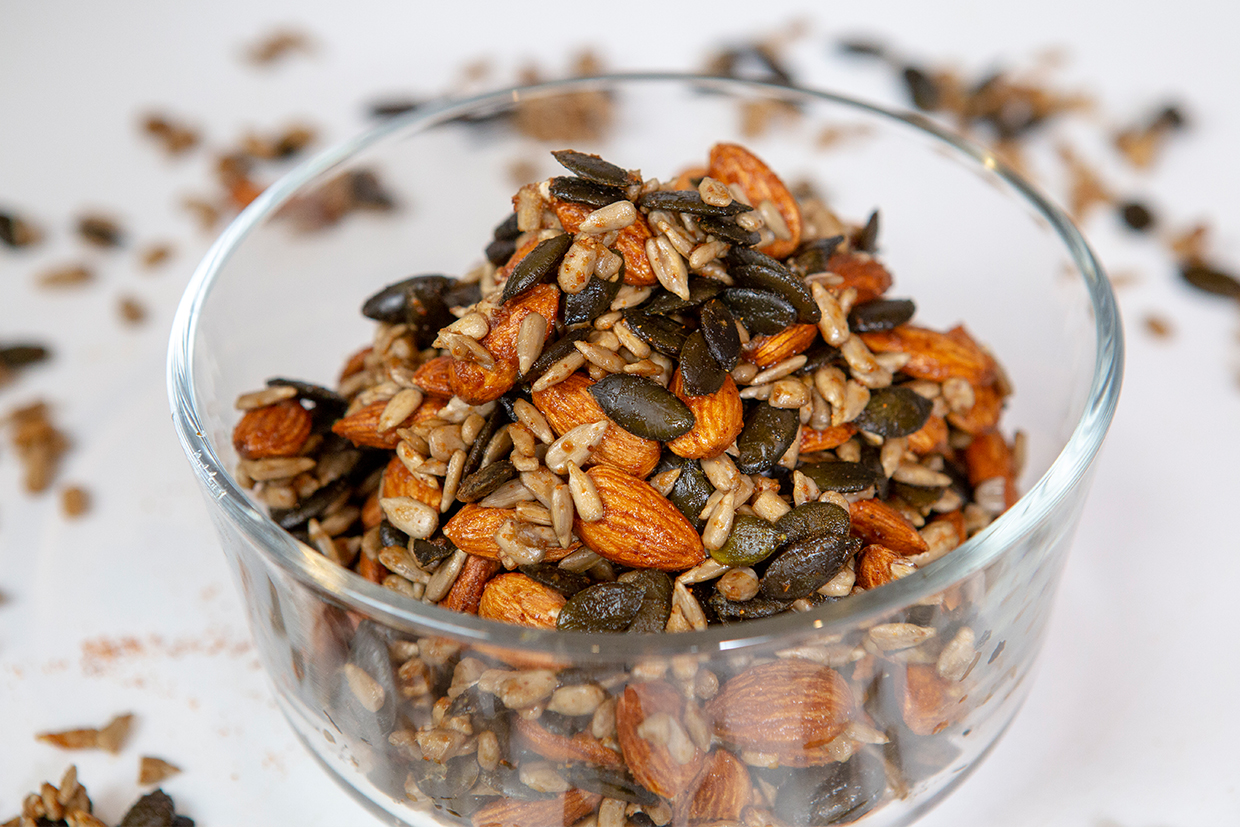 Party in a Bag